The coach has some grand plan, and it’s not communicated to you. Or you don’t get the “dynamics” (read: drama, cliques, weird girl stuff). Or something else completely out of the blue is happening, and you don’t get it.

And for whatever reason, no matter how irrational, she’s not asked back to the team.

There’s another team. There’s somewhere else your Dd fits. It feels bad in the short term. You’re probably right to be mad. It’s probably unfair.

But, for whatever reason, she wasn’t asked back. Maybe it because she was playing up, and she’s young. Maybe certain girls or dads don’t like that she joined the team only two years ago. Maybe someone’s friend is leaving another org and plays her position.

There is another team. And they are pumped to have her. She hit a game winner against them, and they know it. And they’ve been super positive since she tried out.

There’s always another team. And there’s probably drama there too. But keep your head up. Be kind. Don’t leave on bad terms. Say thank you. Say we’ll see you on a softball field soon, that you’re still rooting for all the girls.

And then, play them. And hit the game winner. And maybe, maybe it will all make sense in the end.
M

This happened to DD and that change she made was the best decision she ever could have made.
Did it suck at the time, yes but it was worth it.
3 years later when she finished her final year before college her coach told her that her previous coach told him not to take her and he was so glad he didn’t listen to him.
Still no idea why the former coach didn’t take her back or why he reached out to the new coach.
N

I feel your pain, we were in a similar situation last Summer. Our team was moving up in age, but my daughter was playing up and still had another year of eligibility. She was invited to join the lower aged team and not continue with the team she had been on. Telling her was just about the hardest thing that I've ever had to do. There were a lot of tears on both sides. So, we hit the tryout circuit and used it as an opportunity to find a new home.

After doing the dog and pony show she had a number of offers from top teams in the area. We made our choice and just finished a GREAT year. Change is hard. Disappointment is hard. Especially when they don't understand the reason for it. But the great thing about softball is that there is always another team who would love to have your daughter play with them. Good luck! 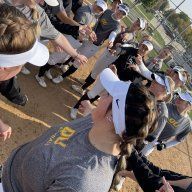 My DD played 14u with the same team. Was never allowed to play 3rd, said she wasn't athletic enough, and she played 1st. Her second 14u season she played every game at 1st and batted 8-9 in the order. Tryouts came around for 16u coach tells her she'll be second or third in line to play 1st. We left joined a bigger organization, traveled more, played 1st still but mainly 3rd, and batted 3-6 most of the time. Last year of 18u select we switch to a bigger organization, she plays 3rd every game and bats 4th 90% of the time. Out of all the girls on that 14u team my DD reached the highest level of college ball (D2) and was picked up as a 3rd baseman. Point of this is never give up, don't think some select coach knows whats best for you or uses you right. Some are great people but are lacking coaching skills. We lucked out this past season and had a great coach and experience.

When changing teams, be coachable, don't think you deserve anything, earn your spot, and make sure you get to know your coaches/teammates.
G

You have to just accept things and move on (which you have). Better to find out now than a month after the season starts.

My philosophy is that a girl should change teams every 2-3 years. Of course I learned this the hard way. Once a coaching staff gets in their minds a girl's skill set, it is pretty much impossible for them to see anything else.

At 16u, my daughter was deemed not good enough to pitch on the main fields in showcases when college coaches were there. And she was never allowed to pitch against a quality opponent. And we played on a local team - not some team with megastars. And yet I think they were shocked when we chose to go elsewhere for 18u.

And what happened at 18u? She went to a regional team where she was the #1 pitcher. She got multiple D1, D2 and D3 offers within 3 months. Seems maybe she was good enough to pitch in local tournaments.

The two pitchers on her local team that were "better" than her? Neither is pitching in college. One did go as a hitter.

Now for my amusing story. When I coached rec league, I had evaluated the girls on my team and had mentally put them in skill sets. Half way through the season, someone was not there so I was the warm up partner for a "marginal" girl. Just playing catch with her for 3 minutes totally changed my perspective on her. From that point on, she was one of my key players, and we started winning a lot more games. She was on my team the entire time, I watched her play 8 or so games and saw her in all the practices, and I totally missed it.
N

gator5 said:
My philosophy is that a girl should change teams every 2-3 years. Of course I learned this the hard way. Once a coaching staff gets in their minds a girl's skill set, it is pretty much impossible for them to see anything else.
Click to expand...

This is such a great observation. Coaches, for better or worse, start to typecast players as hitters, fielders, teammates, etc. If you have a girl that plays multiple positions, but is needed as say a first baseman, she may not get the opportunity to play shortstop or left field, so the coach never thinks of her as such. A lot can change in a couple of years with girls skills.

Not sure I would be brave enough to move my daughter every few years just for the sake of getting a different experience/perspective, but I understand and respect it.
M

I know it doesn't feel that way at the time, but I've always said that one of the most considerate things a coach can do for a player is to cut them at the proper time. One of the least considerate things a coach can do is to keep a player they should have cut. The reasons don't really matter, and it doesn't matter if the player deserved to be cut. If you don't intend to play the kid enough then cut them and let everyone move on. Too many coaches will keep a kid they don't intend to play and force the player/parents to make the decision to switch teams after a wasted season.
You must log in or register to reply here.
Share:
Facebook Twitter Reddit Pinterest Tumblr WhatsApp Email Share Link